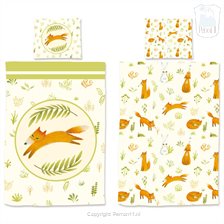 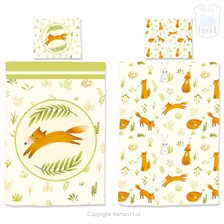 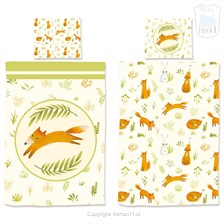 Unfortunately, this product is no longer available. We may still be able to supply this design as custom work. Please contact us for the possibilities.

Is your child also as ' s fan nature or tales of foxes and rabbits? This original quilt is great to dream under way. Because it is double-sided use, there is lots to explore.
Gast Illustrator Eline Krus has specially designed Perron 11 quilts a collection.

Both the duvet cover as a cushion cover is made from soft 100% cotton quality and the offset bottle neck has a tuck-in strip of 40cm long. Because the duvet cover is reversible use, you always just create a different atmosphere in the nursery. On one side is the fox in the center and on the other side, for example, can cover everything under the behavior of the fox.

This duvet you like to combine with one or more muustickers with   bunnies. Or a wall or strip pattern wallpaper Vosjes and bunnies.   to create a playful boy or girl room

We have this duvet in other sizes: 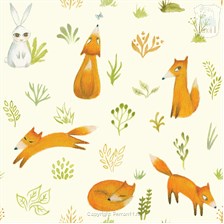 Loving children wallpaper with foxes and rabbits for both boys and girls babies and toddlers! Only when Perron 11. Order now!